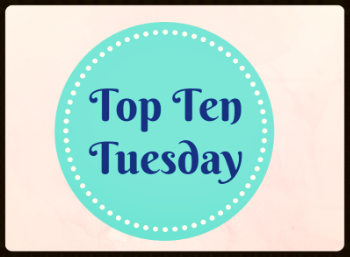 Top Ten Tuesday is a weekly meme hosted at The Broke and Bookish. Each week the bloggers at The Broke and The Bookish put out a topic, and discuss their top ten options for said topic. This week’s Top Ten Top Ten Books People Have Been Telling You That You MUST Read (whether because they think it’s a “you” book or it’s just been generally recommended so often)

Between the Devil and the Deep Blue Sea by April Genevieve Tuchokle. Sometimes I feel as though this book itself is wanting me to read it. Every time I go to a book store, it’s right there in my face. Even if I’m no where near the YA/NA section in B&N. Which is seriously weird. I’ve had a few friends tell me to read it, and have offered to loan it to me, but I just haven’t had the connection to read it. I really think it’s the reviews that are holding me back. On goodreads and various blogs–there’s such a huge love/hate swing that it leaves me wondering if I’d really like it, or just be frustrated with it early on and not finish it.

Throne of Glass (and series) by Sarah J. Maas. This is a book/series that I feel everyone has read. And everyone tells me to read, I just haven’t had the chance to get to it. I fully intend to read the first book, and probably the whole series by default, but it’s not one that’s seriously pressing on my list.

Anita Blake series by Laurell K. Hamilton. This isn’t on the list so much for “OMG READ THIS” But rather, “OMG COME BACK TO THIS”. I read the Anita books like they were illegal contraband in high school–we passed the tattered paperbacks around the female population of my school the way stocks are traded. I stopped reading after Narcissus in Chains book 10/22 holy crap. I stopped reading because of the severe shift in plot (lack thereof) and subject matter. I couldn’t handle Anita’s power of the week gained through sleeping with whichever male character that had working genitalia, so I set them aside. Recently, I’ve had a few friends tell me to try them again. I’m still strongly weighing my options.

“WHAAAAAAAAAAAAAAAAAAAAAT?! You’ve never read the Hobbit? How can you call yourself a nerd? You HAAAAAAVE to read it.” Welcome to #7 on my list The Hobbit by J.R.R. Tolkien. I think it’s really fun to see people’s expressions when I tell them I hadn’t read the LotR series until after I had watched LotR: Fellowship of the Ring AND Two Towers. In fact the only reason I had read those is a friend had told me she wouldn’t see Return of the King with me until I had read the trilogy. Don’t get me wrong, I love Tolkien and the world he’s created. I just cannot get into the Hobbit. I’ve tried multiple times, and it’s still on my TBR list and so it’s ended up on this list.

One Piece by Eiichiro Oda. “You have to read this manga, it’s one of the big three!” (*the big three being Bleach, Naruto and One Piece). I’ve had this manga recommended to me several times by several different friends and even booksellers. I’ve given it a shot, and I can’t gel with the art style. It’s not my aesthetic and I can appreciate how popular it is–it’s just not for me.

The Hollows series by Kim Harrison. I’ve been told that these books are right up my alley. Great urban fantasy, strong female characters, great plot and an engaging series. I’ve given a couple of these to a friend as gifts, I just haven’t read them myself. Though I have a feeling once I return the Iron Druid books and some manga series I’ll end up with these as well.

The Giver by Lois Lowry. This wasn’t book I had to read in high school, and I’ve gotten funny looks from people who didn’t go to high school with me because it’s not on the required reading list. I’ve been told to read this book, that I’d enjoy it–especially before I go and see the movie (which is something I intend to do.)

If I Stay by Gayle Forman. If I Stay is one that’s been whispering and showing up in my peripheral vision for a while now. One of my friends called me and told me I need to put everything aside and read this book. I think that the cosmos are conspiring for me to read this and Between the Devil and the Deep Blue Sea, though I’m leaning more towards actually reading If I Stay because I have it in my possession.

Legend by Marie Lu. I’ve had this book handed to me by a friend with the very direct message of “read this.” I haven’t yet. It’s in my pile, and I will one day. But she’s not the only one who was telling me to read this.

Dresden Files by Jim Butcher. These books have been recommended to me countless times. I finished Simon R. Green’s Nightside series and have whined extensively that there’s a whole in my reading shelf now that I don’t have those books to look forward to. I’m strongly thinking about getting into this series, though I know once I do, there’s no going back.

So that’s my Top Ten Tuesday post for this week. If you’ve done one as well, feel free to link it in the comments. 🙂