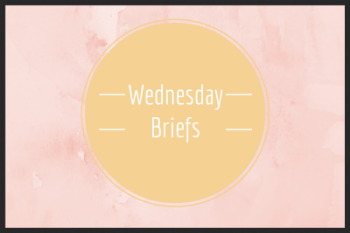 Welcome to my weekly Wednesday Brief flash fiction entry! This is just a free piece of flash fiction (between 500-1,000) words based off of a prompt. I’m part of a wonderful group of flashers 😉 and I’ll have a link to a site where you can read other stories, after my piece.

The siren call of the sea, with its rolling rhythm and whispered melody that matched the song in her soul lured her out further. Each step taking her further into the crystalline waters, until just the tips of her toes brushed the silky sand–one step further and she was treading water. Her heavy gear lay on the beach, unguarded, but this place was peaceful enough that she didn’t bother to ward it.

She struck out toward the horizon, her arms propelling her forward with each stroke. Swimming came naturally to her, easier and simpler than getting around on the ground. The currents pushed against her, providing resistance, causing her to use her muscles and force herself past them. She paused, past the breakers where the water was glassy and calm, the shore a distant smear of pale tan sand.

Here the birds wheeled slow lazy arcs against the brilliant blue sky, swooping low to skim across the water’s surface. Fish swam below her feet, a few of the larger, more curious species approaching warily only to retreat to the depths. Her quiet was broken when she heard someone yell out to her. Treading water, she looked to the left where a skiff was heading toward her. The motor was quiet as it bounced and skipped across the water’s surface, propelled supernaturally.

She groaned, realizing then who had come out to fetch her. Drake stopped the craft a few feet away, and though it hovered a few inches off the water’s surface it created enough of a draft to knock her back. “Do you not understand the meaning of time alone, Drake?” She swam toward the skiff, ignoring the offered hand up for help, and hauled herself out of the water, landing ungracefully on the deck.

“Stop flopping around, we have to shove off.” Drake hauled her up, wrapped a blanket around her. Water streamed off of her clothes, pooling on the wooden floor.

His magic made her uncomfortable, it was hot and burning, glowing as bright red as his hair. His hand was pressed to the steering mechanism, their travel faster than the motor could ever dream to produce. His mouth set in a harsh line, the glow spreading up over his hand, eating its way up his arm.

“While you were playing around in the water did you chance to look up?” He pointed with his free hand, a shower of sparks bursting from his fingertip.

She did then, noticing the clouds that were gathering behind them. “Storm season isn’t for a few more weeks.” She snatched up the view-glasses, held them to her eyes, and twisted the knobs, increasing the magnification. Sky ships had started to take form behind the whispy threads of cloud.

“The port?” She asked dread settling in her stomach. Those who had taken to the sky lived lawlessly. Often invading the ports and the remaining land masses to fuel their ships, both with crew and supplies. They rarely left anything behind.

“Already locked down. We’ve got permission to leave.” Drake said. They were almost to the Isla. “Release the wards, Aggie, we have to move.”

She drew out a silver necklace from under her shirt, bit her thumb hard enough to draw blood, smearing it across the smooth surface of the pendant. It grew cold, the metal frosting over, before the ice crystals were absorbed once more, the pendant flawless. “Hurry. I want to cloak us as we leave port. We’re not ready for a fight.”

They drew alongside the Isla, Aggie’s breath catching in her throat. The ship was a thing of beauty, hand carved and built from dark wood, growing darker with age. Aggie had spent a fortune on it, never regretting one cent. Modeled after the pirate ships of ancient times, it was a sprawling beast at nearly four-hundred feet in length, managing the same speed and maneuverability as smaller ships–yet managing to carry the ammunition of one of the floating cities easily. Aggie knew every inch of the ship, and had helped build it. Like all other ships it ran on magic, but she had insisted on four billowing full masts, the additional wind power making them faster than almost anything on the seas.

“I thought you knew a guy here..” Drake muttered latching the skiff to the chains that would haul it flush against the sides of the Isla once they were both aboard.

“I wasn’t meeting him until tomorrow. Go below and make sure everything’s charged up. Boost it if you have to.” Aggie was right behind him, climbing the rungs of the ladder. She accepted the hand up and over the railing before the redhead disappeared below deck. Lightening arced overhead, the air charged with unnatural electricity. She climbed to the control room, the wheel aglow with shimmering light. Her hands closed around the aged wood, feeling the warmth of Drake’s added magic flow through her.

Aggie felt the ship give a shuddering jolt as it pulled away from the dock. Weigh lines were drawn up, wards slowly snapping back into place as she steered through the straights, slowly, carefully, not to draw attention to them.

‘Hurry, they’re searching for magic.’ Drake’s voice eased into her mind. The sky dwellers must have gotten desperate to start searching ports for magic users. She straightened her shoulders, and braced for a fight.

Check out the other flashers: